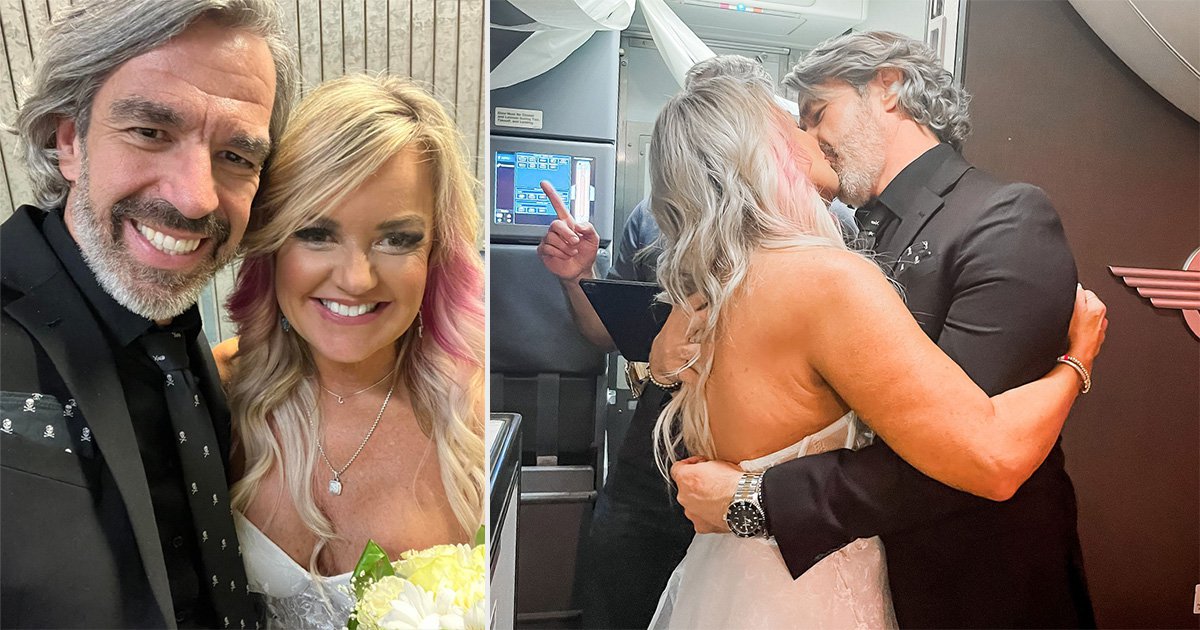 An Oklahoma couple took their love to new heights last week, tying the knot 37,000 feet in the air while flying from Dallas to Las Vegas.

Upon realizing mask mandates had been lifted aboard some airlines, Jeremy Salda and Pam Patterson, who had been dating since August 2020, began joking that they should hop on a plane and elope in Las Vegas.

‘Within about an hour we had our flights and hotel booked,’ Salda told CNN on Friday. ‘Pam bought a wedding dress online and overnighted it.’

They ran into trouble, however, during their layover in Dallas, Texas. The couple had booked a wedding chapel in Vegas for 9pm, and faced several delays before their flight to Vegas was canceled.

Patterson and Salda weren’t down on their luck for long, after they met Chris Kilgora, an ordained minister who was planning to travel to Vegas while stuck at the terminal. Kilgora overheard their discussion of their wedding misadventures and offered to marry the couple in Vegas himself.

The three then booked tickets on a Southwest flight headed to Vegas that only had four seats left. This flight, however, was out of a separate airport, located about 25 minutes away.

‘We had 50 minutes before the plane took off,’ Patterson told CNN. ‘We told the Uber to floor it, and he did.’

As the couple ran through the second airport, decked out in their wedding attire, people awaiting their own flights shouted congratulations to them.

They made it to the gate and their attire sparked the interest of the captain. Patterson explained the story and joked about getting married on the flight, to which the pilot said, ‘Let’s do it!’

Members of the flight crew hung up streamers made out of toilet paper and made the officiant a sash out of snack bags.

In addition to decorations, passengers helped set mood lighting using the plane’s call lights and downloaded ‘Here Comes the Bride’ to be played while the bride walked down the plane’s center aisle. One flight attendant even stood as a bride’s maid.

‘Southwest has been the love airline for nearly 51 years,’ the airline company said in a statement. ‘We always enjoy an opportunity to celebrate our customers in special ways.’

Passengers aboard made a guest book, which they filled to the brim with notes, including their seat numbers and names.

‘Everybody couldn’t have been more kind, more nice,’ Patterson said. ‘We obviously delayed the drink service, but no one seemed to care.’